I will walk you step by step through the restoration of a an early 1960’s U.S. Navy Rolex Submariner 5512.

One of our customers came into the shop and said he had given his military watch to his wife as a present. He told us the watch had been presented to him by the U.S. Navy on completion of his decompression tests to become a U.S. Navy Submariner.

The watch had been with him throughout his navy career which included various posting to different class U.S. Navy submarines including Polaris. Upon leaving the navy he carried on wearing the Submariner until the bracelet broke and was eventually lost. Many years later he came across the watch in a drawer and was about to throw it away when his wife said she would love to have it.

Upon inspection of the watch we found it would need a new bezel insert and plastic crystal. The case would need a very sympathetic polish and the movement would require a complete service and overhaul. We would also need to source the right riveted 20 mm Oyster bracelet.

The watch then went to our workshop to start the restoration…

The service then started using original Rolex parts including a NOS (New Old Stock) bezel insert, the dial proved to be in excellent condition after a very light clean, a new plastic watch crystal was fitted.

The case and bracelet were then very lightly polished to give the Submariner the perfect aged look. In all this project took about four weeks to complete including sourcing the parts.

Check out the finished watch… 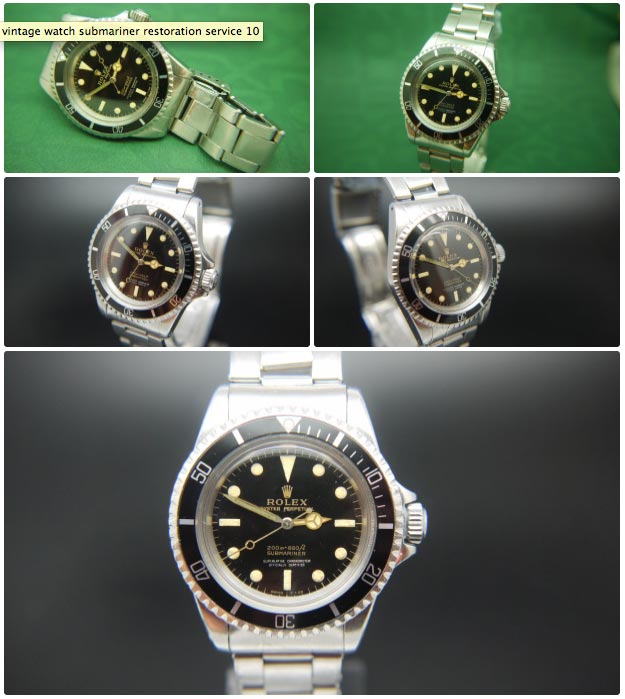